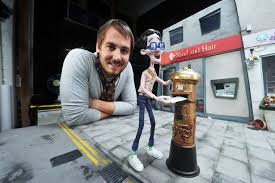 A promising outcome from Ontente’s Prague Spring this year has come through the networking of one of our delegates, midlands animator Drew Roper, who has since won £30k from the Future Fund, part of Sky’s Corporate Responsibility programme.

While neither Contented or are partners can claim any credit for Drew’s award, his project is not just a worthy winner; it’s the kind of content project we at Contented would like to co-produce. This is because the story it tells is strongly aligned to a social purpose of ours – to help people and organisations find and create meaningful work.  http://skyarts.sky.com/sky-arts-ignition-series/drew-roper

Titled “At-issue”, Drew’s short dialogue-free animated film tells of the struggle of an unemployed down-and-out called Bart to pursue his dream of becoming a film star. (Talk about life imitating art, this is precisely the scenario that we have been invited to address in our proposal to a midland engineering company.) On his journey, Bart encounters set-back after set-back, unpeeling, like an onion skin, layers of personal issues. For example, a sneezing frenzy alters his physical appearance, which Drew portrays by mixing the three main techniques of animation, stop-motion, 2D and CGI. But when Bart’s perseverence finally gets him to his film audition, he starts to question his dream…

Returning from a fortnight in Prague, where they were tasked with exploring commercial opportunities, delegates followed up on contacts generated with the help of Film New Europe and the One World/IDF. Drew was directed to a small Czech animation company which organises the EU’s Anomalia workshops. But when the Sky Awards were announced, he had to drop everything to focus on his film.

As a member of Contented, Drew was able to pass the contact to the Contented coop to keep the dialogue moving, trusting that he wouldn’t be left out of the deal. Now a possible Czech partnership is emerging and there could be a new project to join when Drew’s ready for more work. http://prezi.com/sqs8dodj62zi/anomalia-labs